The Griffin BlueTrip Aux is a very compact Bluetooth audio device for smart phones. We tested it with the iPhone 4 and found that while it produced great audio, the hands free calling features left a little to be desired. That said, it is a decent solution in a really small package. 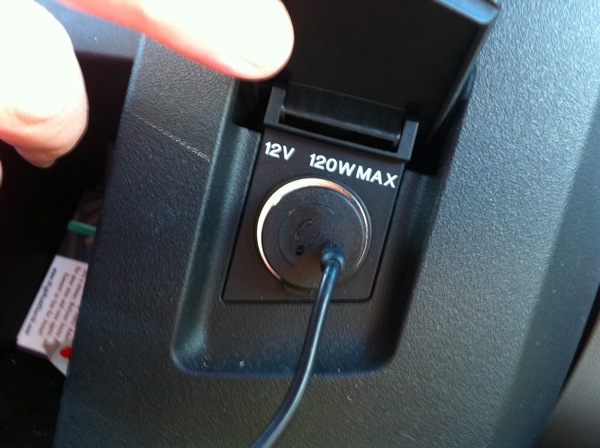 The Griffin BlueTip Aux is a compact device. It plugs into a cigarette lighter (DC jack) in your car and is nearly flush with the dash. On the exposed face it has a stereo jack which you can then plug into an auxiliary jack or a cassette adapter to get audio over the car stereo system. There is also a button with an LED indicator on it. The button is used to answer a call so that the sound of the call will be transmitted from the phone to the BlueTrip over Bluetooth and then over the wire to the stereo. There is also a tiny speaker that picks up the voice of the person using the BlueTrip for hands free phone conversations.

In our experience the audio quality for things like podcasts and spoken word was indistinguishable from when the iPhone was plugged directly into the auxiliary jack. Music was almost as good. We recognize that any wireless solution will cause some degradation compared to listening to a CD or having the music player connected via a cable. So, while we couldn’t tell a difference between the BlueTrip and a wired connection for spoken word, music quality was not as crisp. But the difference is negligible.

The audio for calls was good so long as the BlueTrip was exposed. In our test vehicle, a 2011 Honda Pilot, we tried it first in the power jack that is inside the storage compartment/hand arm rest that also houses the auxiliary input jack and it was nearly impossible for people to hear when we spoke on phone calls.

If you don’t answer calls by pressing the button on the BlueTrip, then the phone mic is the default device. This took some getting used to, since our jack is under a cover as you can see above. It is more convenient to just hit the answer button on the phone. But if you do, people will not be able to hear and you won’t hear them because the phone won’t use the BlueTrip until you go into the phone’s options to tell it to use the BlueTrip instead of the built in speaker and mic.

Finally, the hands free command feature is nearly useless on the BlueTrip. You are supposed to be able to press the button and say, “Call Kevin Purcell Home” and it will place a call to the person’s home number. It never works, always calling someone else. We gave up on that feature which is disappointing. Using our older Motorola Bluetooth device this feature worked well so we know it is not the fault of the phone.

If you don’t care about voice commands and your power connection in your vehicle is in a place where you can see it so that you can direct your voice towards it, then this is a good product. Despite the cost we would recommend it. However, don’t bother if the above are a problem for your. Find another solution.

Griffin’s BlueTrip Aux is $79.99 at the Griffin Technologies web site. We made the mistake of buying it at Apple where it was actually higher. However, Provantage has it for $10 less.