Technologizer surveyed a couple thousand iPhone users to gauge their satisfaction and despite numerous issues, the vast majority of them seem to be happy campers. 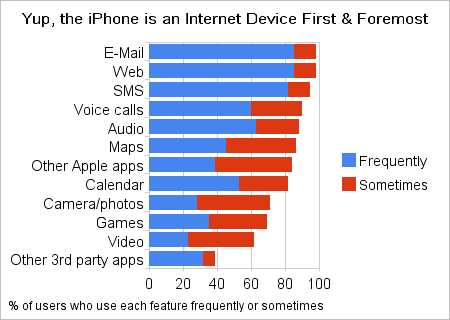 With those kind of numbers, it’s a miracle that 91% still said they were satisfied with the iPhone. What’s more, 78% said the iPhone was a good or excellent value.

The iPhone is a heck of a lot more than just a “phone,” and it seems most users like its slick interface, third-party apps and cool-factor to forgive some of these shortcomings.

I too appreciate all that the iPhone has to offer (I bought the original iPhone the day it launched and have since upgraded to an iPhone 3G), but I think I’ve experienced just about every issue on Technologizer’s list at least a few times. Unfortunately, dropped calls and crappy 3G reception are a daily occurrence for myself and many of my iPhone-toting friends and family.

Check out the details of the survey at Technologizer.