Kensington has announced a trio of new charging docs for the iPhone 4, that are also compatible with previous generation iPhones and iPod Touches. 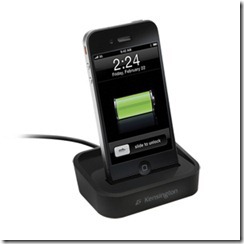 The first is the Kensington Charge and Sync Dock. With it a user can both charge the phone and sync it with a computers. The dock looks similar to charging docks we’ve seen previously. It has a small rounded rectangle-shaped base with the back slightly higher to help it sit up in portrait mode as it lays back at a slight angle making it easy to see while in the dock. On the back is a 30-pin dock connector so the owner can connect it with his or her computer to sync and charge. The base has a non-slip material to keep it from sliding around the desk. There are matching black inserts so all of the iPhone and iPod Touch models will fit including the iPhone 4.

Kensington is offering the dock for $29.99 and it can be purchased at Amazon. All three docks come with a 2-year warranty.

There is another version of the dock called the Kensington Charging Dock with Mini Battery Pack and it is the like the previous dock except that it also comes with an extra mini backup battery. The 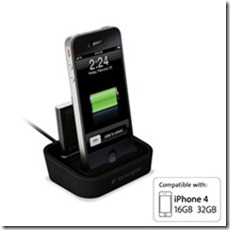 dock has a spot to charge the backup battery just behind the connector for the iPhone/iPod Touch. Both the iPhone and the backup battery will charge simultaneously. Kensington says that the battery pack will add 30 hours of music playing time, 6 hours for video time and 3 hours of talk time. Like the other dock, Kensington says this dock will also charge the iPhone while it is in a case. It too is compatible with the iPhone 4 and previous generations with the provided inserts. It retails for $69.99 and also has a 2-year warranty.

iLounge has a review of this dock so would-be buyers can get some help deciding if this dock is for them.

The third Kensington dock is the Kensington Nightstand Charging Dock. This dock is actually more than just a dock. It is compatible with a special app called Nightstand that turns your iPhone into a nightstand clock and weather center.â€ When plugged in, the iPhone is held at either a portrait or a landscape orientation and won’t go into sleep mode so the user can always view the onscreen information provided by the app. This combination will be smaller than most nightstand clock radios and it provides weather info. The app is free and would-be buyers can learn more about it from Kensington’s web site.

iLounge also reviewed this dock saying, The good news is that the Nightstand Charging Dock does exactly what it’s supposed to do, with or without the use of â€¦â€ the app.

The Nightstand Charging Dock costs $39.99, although Zones.com has it for only $30.99. Having never dealt with the site, I cannot comment on their reliability.

Below are the screen shots of the app. You can download it and try it out as it is a free app and works without the dock. 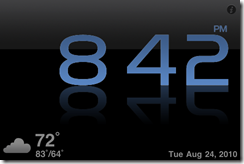 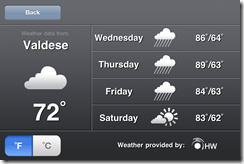