Dr. Henry Edward Roberts- one of PCs creators, passes away 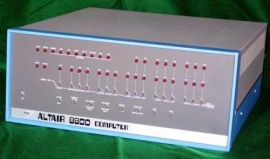 So who is Dr. Henry Edward Roberts you ask?  Well, its his fault that there is a Microsoft and a personal computer.  He is the one who created the Altair 8800, the machine that Bill Gates and Paul Allen used to write Altair BASIC, which would ultimately lead to Microsoft and the Windows operating system.  The Altair would ultimately become the PC we use today, while BASIC would evolve into what is now Microsoft Windows.  All because Dr. Roberts had an idea to build something new…a personal computer.

Dr. Roberts founded Micro Instrumentation and Telemetry Systems (MITS) in 1970. In 1974 his company released the $395 Altair 8800 personal computer. It was based on Intel’s revolutionary 8080 processor and, after being featured on the cover of Popular Electronics (included after the break), would become the world’s first truly popular personal computer.

In a joint statement released by Allen and Gates:

We are deeply saddened by the passing of our friend and early mentor, Ed Roberts, and our thoughts and prayers are with his family.

Ed was truly a pioneer in the personal computer revolution, and didn’t always get the recognition he deserved. He was an intense man with a great sense of humor, and he always cared deeply about the people who worked for him, including us. Ed was willing to take a chance on us two young guys interested in computers long before they were commonplace and we have always been grateful to him. The day our first untested software worked on his Altair was the start of a lot of great things. We will always have many fond memories of working with Ed in Albuquerque, in the MITS office right on Route 66 where so many exciting things happened that none of us could have imagined back then.

More than anything, what we will always remember about Ed was how deeply compassionate he was and that was never more true than when he decided to spend the second half of his life going to medical school and working as a country doctor making house calls. He will be missed by many and we were lucky to have known him.

Also, in a statement from Steve Wozniak, co-founder of Apple:

“He took a critically important step that led to everything we have today,” Wozniak said in an e-mail.

Dr. Roberts died of pneumonia at the age of 68.