The HP Pavilion dv2000 series is the best-looking sub $1,000 notebook on the market. That might be a bold statement, but the dv2000 makes other manufacturers’ offerings look downright archaic. Rounded edges, latch-less lid and imprinted wave design make the notebook especially attractive. At just over 5 pounds, the 14.1-widescreen notebook is light enough to carry around campus or use comfortably while commuting. 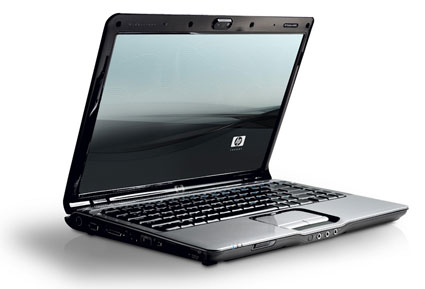 The HP Pavilion dv2000 series is the best-looking sub $1,000 notebook on the market. That might be a bold statement, but the dv2000 makes other manufacturers’ offerings look downright archaic. Rounded edges, latch-less lid and imprinted wave design make the notebook especially attractive. At just over 5 pounds, the 14.1-widescreen notebook is light enough to carry around campus or use comfortably while commuting.

HP sent to us a dv2000z with an AMD Turion 64X2 TL-50 processor, 1 GB of RAM and 80GB hard drive.This configuration costs $769 from hp.com after $100 in instant savings and $50 rebate.Buyers can choose between Intel (dv2000t) and AMD (dv2000z) versions, but based on published specs and our experience, we highly recommend the Intel version. While the AMD version will save you a few dollars, the dv2000t boasts significantly longer battery-life and slightly faster overall performance.Everything about the notebook is glossy-its lid, the screen, palm rests and event the track pad. While the glossy finishes add to the cool-factor, they are also fingerprint magnets.

At 1280×800 pixels, the BrightView display is crisp and clear. The only problem with the screen is it does not fold back completely like most notebooks do. This shouldn’t bother most users, but the screen can be tough to view in cramped spaces like an airplane seat, especially if you’re tall like me.This notebook is aimed squarely at consumers and students, delivering more than enough power to edit photos, run multiple office applications and surf the web. The dv2000z comes with an integrated NVIDIA GeForce Go 6150 video card, which is fine for the majority of users. Video playback is smooth, but hardcore gamers should look elsewhere.Its full-size keyboard has a nice feel to it and is comfortable to use for extended periods of time. The power button and an array of QuickPlay buttons run above the keyboard. The track pad is responsive, but its buttons feel a little loose and squishy, lacking a definite click found in other brands. 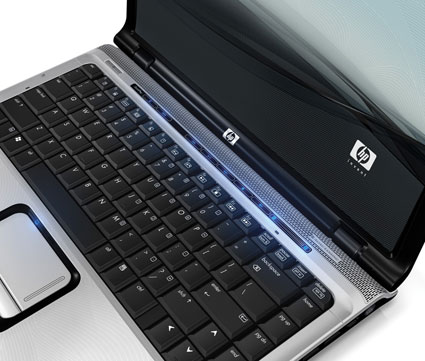 The dv2000z comes with QuickPlay, a feature that lets users watch DVDs, view photos and listen to music without booting up Windows. This means quicker access to your media files and longer battery life. A remote control is included and conveniently stows away in the ExpressCard slot. Built-in Altec Lansing speakers are better than those found on other compact notebooks, but not impressive enough to ditch external speakers or a good set of headphones.

Slots and ports are laid out well on the dv2000z. The front edge of the notebook has a microphone input and dual headphone jacks, one of which provides digital output. There’s also a WiFi switch. Along the left side is an ExpressCard slot, 5-in-1 Media card slot, Ethernet jack, FireWire, USB 2.0, Expansion (docking), VGA and S-Video ports. A security slot is on the left side of the screen. The right side of the notebook includes the DVD burner, two USB 2.0 ports, modem jack and AC adapter port. By splitting the USB ports to the left and right side, HP has ensured either side of the computer doesn’t get too cluttered with accessories.

The dv2000z can also serve as a complete desktop-replacement when combined with the HP xb3000 notebook base. The HP xb3000 elevates the notebook to make it easier to view the screen, offers a ton of ports and includes a decent pair of speakers. The expansion base can be outfitted with a 300GB drive and connects to the dv2000z with a single cable. A wireless keyboard and mouse are included with the xb3000. 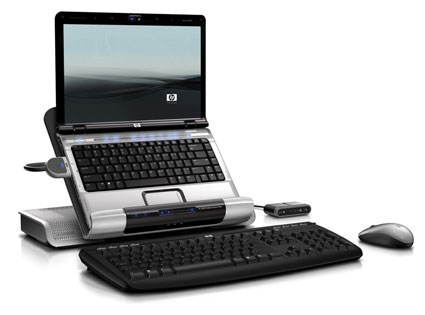 Battery life was disappointing on the dv2000z. With the monitor at full brightness, the dv2000z went on standby after two hours and 20 minutes of web browsing and word processing. A 12-cell battery can be ordered if you need more juice, or you can order the dv2000t, which provides about an hour of battery life more than the dv2000z.

If you plan on keeping your notebook plugged in most of the time the dv2000z will do the trick, otherwise go with the dv2000t (Intel). Any student will be more than pleased to find a dv2000 series notebook under the Christmas tree this year.