We always get a kick out of concept notebooks and the Compenion is no exception. Designed by Felix Schmidberger, the Compenion has dual touchscreen displays and multiple docks, including a home-theater dock with built-in projector. Very interesting concept and OEMs should definitely start exploring more daring designs.

Schmidberger wrote in to tell us more about the Compenion.

The system contains of a personal computer you take with you during the day, several context-oriented docking stations (for example a home entertainment station for your living room), a “senstylus pen” to control the computer and a leather etui.

The computer itself has an OLED touchscreen, where you can directly work on, much like with a umpc or pda. The whole screen is a slider, it can be moved forward to reveal a second OLED touchscreen underneath, where you can display a keyboard or working controls, similar to a setup with 2 monitors. Because of its interactivity you can place exactly the controls there that you need at the moment or have individual styles and themes to fit your taste. It is also possible to either have a keyboard diplayed there or to write directly on it with the pen.

The pen has 2 dedicated areas: in the front there is a groove that devides the 2 actionbuttons when you are holding it as a normal stylus pen. In the rear, you have a thumb-sensor field so that you can use the pen as a remote control if you turn it around.

One of the stations is designed for your living room. It is spezialized on home entertainment character. The computer has a laser projector embedded at its bottom side. With it, you can project the image to the wall and use the computer with the pen in remote control mode, while sitting on your couch, to watch a movie, for example.

Check out these detailed drawings of the Compenion 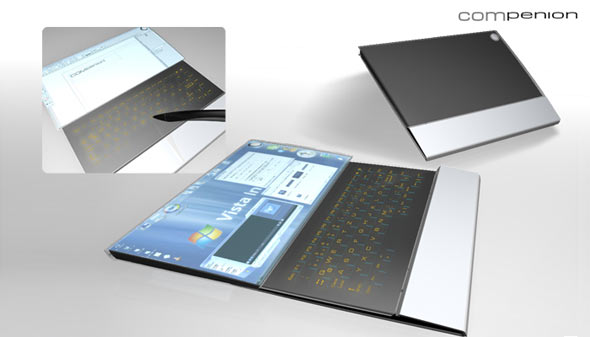 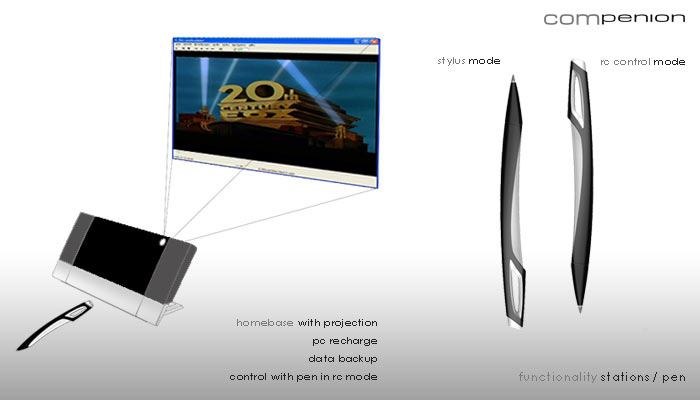 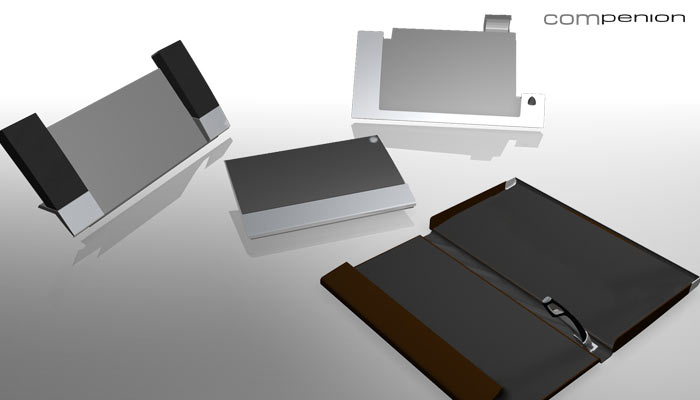