Livescribe introduced the Echo Smartpen, the company’s successor to the Pulse Smartpen. Many improvements have been made, including a new sleek design. 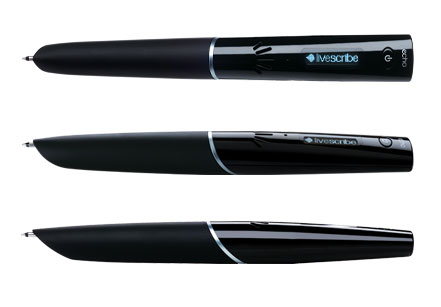 The original Pulse Smartpen enabled the taking of written and recorded notes. Using the company’s innovative Dot paper, built-in infrared camera, and built-in microphones, recorded notes were paired with written ones, allowing users to tap a specific part of their notes and hear the audio that was recorded at that moment. The Pulse Smartpen is still available for $129.95 (2GB) or $229.95 (4GB).

The new Echo Smartpen takes advantage of the expanding Livescribe Application Store, featuring educational applications like dictionaries and translators to games such as Sudoku.

Livescribe will be releasing updates this Fall. Included in these updates will be the ability to email pencasts once the Smartpen is plugged into a computer. Also, when plugged into a computer the Smartpen will act as a graphics tablet, enabling the user to draw freehand with the image being shown on the computer screen. This could be a useful solution for artists wanting an extremely mobile version of a graphics tablet.

The 4GB and 8GB Livescribe Echo Smartpens are currently available from Livescribe, as well as other various retailers for $169.95 and $199.95, respectively.