Convertibles, or what we all know refer to as 2-in-1s, are at the heart of the Windows ecosystem. Every Windows PC maker worth purchasing a device from has at least one 2-in-1 in the available. The idea of these devices is to give users a modern experience while keeping their expectations firmly planted in the past. The Lenovo ThinkPad Yoga 14 is a 2-in-1 that tries to meld what’s new and old for business users.

Available for $999 exclusively at Best Buy, the ThinkPad Yoga 14 is business on the outside and mostly futuristic on the inside. Mostly modern internals give it the power of a high-end PC that’s excellent for desktop productivity and media production. A futuristic hinge and gorgeous 14-inch touchscreen make it a decent replacement for a tablet too.

Trying to meld device form factors is a tricky business. Make it too rooted in the past and you run the risk of not being great at what users expect from their devices today. Make it too futuristic and you alienate classic notebook users who need comfortable keyboards and raw horse power. The ThinkPad 14 comes dangerously close to delivering a comfortable middle ground.

If you’ve seen a ThinkPad before, then you know what you’re getting is a very drab, very durable machine. The outside of the ThinkPad Yoga 14 is understated. At first glance, the ThinkPad Yoga 14 doesn’t look high-end. In a world of lightly colored metals, the ThinkPad Yoga 14’s Magnesium Alloy frame and skin isn’t as flashy. That’s good though, it looks right at home in a board room. That metal makes it durable, cold to the touch and battle ready. So sure, it’s not as good-looking as other premium machines, but it’s a decent trade-off since there’s no case required here.

This sea of black is only interrupted by a few flourishes. There’s a silver “ThinkPad” logo sitting in the bottom-left corner and a “Lenovo” etching.

Two metal hinges connect the two halves of the Lenovo ThinkPad Yoga 14. It’s because of these that the ThinkPad Yoga 14 is considered a convertible. Buyers can fold the 14-inch display on top of its rear for a tablet experience. There are other modes too, one for positioning the touchscreen closer to you on a desk and a tent mode for doing the exact same thing in a different way.

Other notebooks try to do this, but the Lenovo ThinkPad Yoga succeeds because of its keyboard and button setup. Every necessary button or port – volume, power and all – sit on the device’s left and right edges. A removable keyboard might have alienated tablet lovers. When it goes from different modes, the ThinkPad’s keys retract into its body automatically. That’s a nice way of preventing in damage modes like that would have done the keyboards of other Windows 2-in-1s of harm.

Design is by its very definition. Its subjective and an afterthought for a lot of users. ThinkPads haven’t won followers for being flashy. They’ve won fans for having great performance and being durable.

In that respect, the ThinkPad Yoga 14 is a winner on paper. The model Best Buy sells includes an Intel Core i5-4210U processor. With that processor’s 1.7GHZ base clock speed, and 8GB of RAM, you’d expect every app, every command to work almost instantly. Backing up that powerful processor and RAM are an NVidia GeForce GT 840M graphics processor and 2GB of dedicated RAM. This processor gives the ThinkPad Yoga the power to run intensive apps like Adobe Photoshop or Adobe Premiere quickly. Games, including our benchmark Star Trek Online, can have their settings cranked all-the-way up.

Everything looks absolutely gorgeous on the ThinkPad Yoga’s beautiful 14-inch IPS 1080P display. You’ll never find anything better than this display on a convertible. There’s so little space between the glass and the display that you feel like you’re touching what you interact with. Turn on Netflix, enable Super HD streaming and you’ll weep. I’m serious. Above that display sits a relatively decent 720p web camera for photos and videos. Below it is a touch sensitive Start button for taking you back to the Start Screen in tablet mode.

Videos look great, but don’t exactly sound amazing with the integrated speakers. Lenovo says they have Dolby Home Theater technology and they sound decent. I’m just not blown away by them.

Two USB 3.0 ports, a single USB 2.0 port, a media card reader, and Bluetooth 4.0 compliment the experience nicely. A single 1 Terabyte hard drive would too, if it wasn’t for a crucial detail we’ll get to in just a bit.

Home users are always pushing for thinner and lighter. At 4.2 pounds, and 0.8-inches thick, the ThinkPad Yoga 14 doesn’t hit those notes hard. It’s thin enough and light to be convenient. It’s not so thin or light that users will consider it as a complete tablet replacement. It’s too awkward in the hand to achieve that.

I think the trade-offs are worth it. The ThinkPad Yoga’s retractable keyboard is what touch-typists dream about at night. The bottom and edge of each key curves slightly. They are each so soft, but yet have travel. Every word I typed on the Lenovo Yoga ThinkPad Yoga 14 felt satisfying; every press of the space bar had me wishing I could purchase a Bluetooth ThinkPad keyboard for my every day PC. Equally, nice was the one-button touchpad, which was just slick enough to make scrolling fun. Again, every click was satisfying

I’m not a TrackPoint user at all, but they’re both present here and work as they should. They stay out of the way unless you need them.

The ThinkPad Yoga 14 is so slick, so nice and so well designed that it’s hard to believe there are any misses. There are some big misses though, and you’ll notice those flaws the moment you hit that side-mounted power button.

The ThinkPad Yoga 14 comes with a spacious 1TB hard drive and 16GB SSD hybrid drive that sound great in theory. Earlier in this review I indicated that the best 2-in-1s meld the experiences of yesterday with the features that tablets offer today. SSDs, Solid State Drives as they’re colloquially known, boost app performance and make boot-ups something that happens in seconds.

The ThinkPad Yoga 14’s 5400RPM hard drive is crazy, crazy slow. A fresh start feels like it takes longer than the law should allow. File operations sometimes hang. Apps, even those you download from the Windows Store, take a bit too long to open. Before you purchase the ThinkPad Yoga 14 as your mobile media making machine, remember that apps like Adobe Premiere hit hard drives pretty hard. The speedier the hard drive, the better they, and therefore you, work.

The ThinkPad Yoga 14’s claim to fame is that suicide hinge that allows it to transform. The hinge is sturdy enough where the display doesn’t wobble a great deal when you type. I frequently folded the screen back with one hand too. Both are feats that lesser notebooks have trouble with. The hinge is solid, buyers will be transforming their ThinkPad Yoga 14 without worry for years to come. That is, they won’t have to worry about the hinge warping or becoming weak.

The same can’t be said for the lip of the lid that holds the ThinkPad Yoga’s 14-inch display. Users will be opening and closing, pushing that display over and over. The top edge of the ThinkPad Yoga 14’s display I was sent already had some warping in the center. It wasn’t egregious, but it was unbecoming of a device with a Magnesium frame and $999 price tag.

I will say that after dimming the display I came reasonably close to hitting Lenovo’s 8 hour battery life target. Killing the Wi-Fi and Bluetooth on a long flight to hit the full 8 is essential though. Overall, 8 hours isn’t bad at all.

In past reviews I’ve noted that Lenovo has increasingly offered a slate of software changes and extras for its machines. In short, Lenovo has always toed the line, offering software extras where they make sense and extending the Windows 8 experience in some ways that aren’t necessary, but are cool. The Lenovo Start Menu replacement for power users is a perfect example of this. The Active Protection system for protecting the hard drive’s of falling notebooks is another.

Lenovo shouldn’t look for the line separating adding features and adding cruft with the ThinkPad Yoga 14. They’ve passed it. Things like a digital user guide and that Start Menu replacement are joined by the most annoying and buggy add-ons I’ve ever seen on a machine.

Lenovo Reach is designed to let users start something on their laptop and pick it up on their mobile device. It’s half baked. Installations of Maxathon, Lenovo Messenger, Lenovo ShareIt, and Lenovo Companion have you thinking you purchased a low-end machine instead of high-end one. Worse, leaving them installed makes the ThinkPad Yoga 14 unusable for a solid minute while they all run in the background, bogging it down. I’m also sure they result in a slight lag I saw when using the touchscreen keyboard in tablet mode.

During the setup process I told the machine I didn’t want to create a Lenovo Account. The ThinkPad Yoga 14 waited until I put in my Microsoft Account credentials and effectively did it anyway.

The ThinkPad Yoga 14 comfortably hits the right notes. There are some crazy highs here. That display, keyboard, touchpad and processing power are great. It’s durable and relatively thin. I’d have liked, and I think buyers should expect, a faster hard drive for the price.

The software features are the misstep. There’s too much going on here. Too many little add-ons that barely do anything or work correctly.

The ThinkPad Yoga 14 comes very, very close to achieving the unthinkable and marrying two types of devices. Wipe the ThinkPad Yoga 14 of the extra software junk and you have a very nice, very capable machine; even with the slow hard drive. 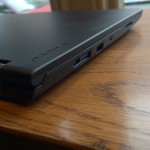 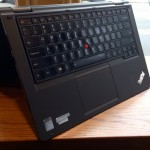 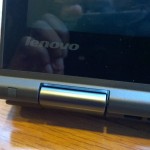 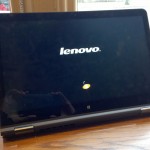 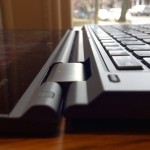 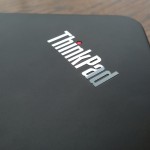 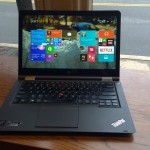 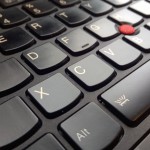 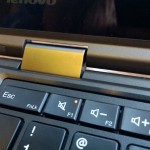 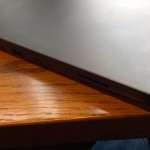 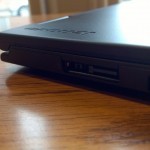