The HP Folio is in the house! We’ve been excited about this business-focused ultraportable since we got a first glimpse last year and went hands-on at CES. The enterprise version (with TPM) is $999, but the configuration available to consumers costs just $899. The specs are all still here including a Core i5 processor, 128GB SSD, and even the backlit keys.

When I first saw the Folio I remarked that it fits right in with HP’s ProBook line, just thinner. That’s exactly the impression I have now, all the more impressive given some of the other ultrabooks I’ve seen lately.

The thin profile and light weight are wonderful for someone as mobile as I am, but unlike other ultrabooks I don’t feel like the Folio is out to impress me just with how thin it is. There’s no taper to a razor thin edge, just a curve that makes the notebook comfortable to carry. The Folio isn’t afraid to be the thickness it is from front to back, and the reward for consumers is a full range of ports.

You get 2 USB ports (2.0 and 3.0), an SD card slot, HDMI, Ethernet, and a combo headphone/mic. I’d like to see ultrabooks at least try for a third USB port, but otherwise this is acceptable.

So far I’m impressed with the performance, though I haven’t heavily taxed the system yet. In editing the pictures for this post the Folio took a noticeable second to crop or resize, but not enough of a lag that I got impatient.

The glossy display offers pretty rich colors, but only within a specific rage. Lighter colors looked blown out at more acute angles. I have to push the display back as far as it will go to get the depth I expect. And, of course, the glossiness can be an issue.

The keyboard is decent, though I am less and less willing to give flat keys a pass the more I use them. The keys have a faint matte coating that helps with accuracy but feels odd as my nails make contact.

The wide clickpad is this ultrabook’s Achilles heel. It does all right when doing basic mouse stuff, but as soon as you bring a second finger in — say when you want to click and drag or just rest the finger on the left mouse button area — the touchpad gets all confused and jumpy. Two-finger scrolling is satisfactory so far, but other multi-touch gestures aren’t smooth at all.

I know I’ll be calling on my friend the external mouse to get through this review.

Check out the gallery below for new pics. I’ll have the review up soon. In the meantime, what do you want to know about the HP Folio? 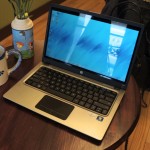 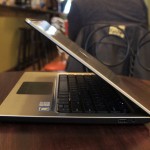 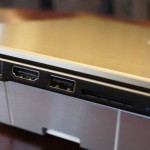 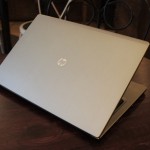 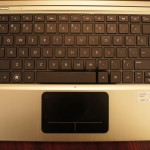 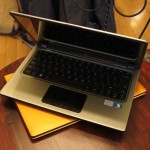 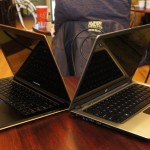 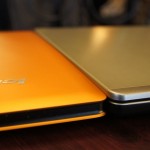 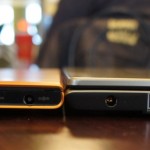