Heads up Mac owners. If you havce a recente MacBook with a multitouch touchpad or the Apple Magic TrackPad, you don’t need to get an iPad or iPhone to get your multitouch gaming on. Touchgrind has brought their popular iPhone and iPad app to the Mac App store so you can goof off while it looks like you are frantically mousing through spreadsheets.

Touchgrind is a finger skateboard game, which requires more dexterity than I currently possesses, but is fun nonetheless. The Mac app is free in the Mac App store, though you do need to adjust to ads which tell you about the mobile versions of the game.

After spending some time playing the game, controls are responsive, and the larger display certainly beats trying to play this on a small screen. I still can’t quite understand how to control my finger skateboard, but that’s indicative of my shredding skills.

Here’s a look at Touchgrind in action on the Mac:

To play Touchgrind on the Mac, place your fingers on the mousepad so that they are on the skateboard. When you hit the right configuration, the skateboard will begin moving. As you approach stunt areas, lift off you front finger then the rear to get some air. If you time it right, you can grind or pull off a trick.

Illusion Labs is right when they say, “Touchgrind is a game of skill that takes 10 minutes to understand but weeks of lectures, boring meetings and family dinners to master.” 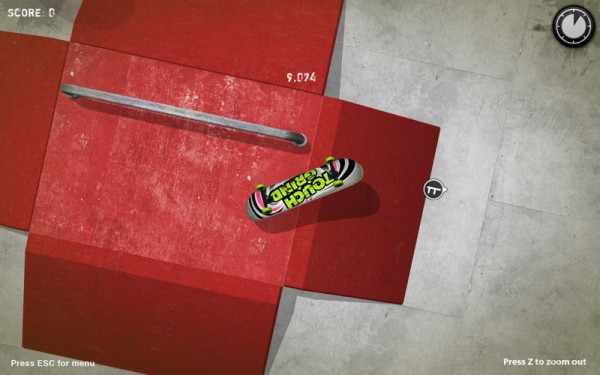 It’s pretty cool to see fun games coming to the Mac App Store for free, especially when Touchgrind HD is $7.99 for the iPad.

To use Touchgrind on the Mac, you will need OS X Snow Leopard or higher with the Mac App Store installed. You also need a MacBook (MacBook Late 2009 or MacBook Pro 2008 and newer) or a Magic Trackpad.