An updated set of photo codes is available from Microsoft that now makes it possible to view and edit RAW photos via Windows Explorer and Live Photo Gallery without needing patches from camera manufacturers. This will allow photographers to see thumbnails of their RAW images inside Explorer and quickly take a look at larger versions of the uncompressed file format in Photo Gallery.

Professional and advanced enthusiast photographers often shoot their pictures using the RAW format because it doesn’t compress the images. This results in pictures that still contain all the data that was captured by the camera, usually a Digital SLR. The photographer can edit the images from there. The format provides more possibilities. It is like being able to reshoot the picture even though you are no longer at the site where it was taken.

It cannot work miracles with things like blur, or when images are so over-exposed that only white shows up, or even so under-exposed that patches are only black. However, things like White Balance can be changed from sunny to cloudy, or the photography can correct color and other things to make images look better than they would if they were shot in JPG format.

Until now, thumbnails of files shot in the RAW format could not be viewed natively in Explorer without a patch from camera makers like Canon or Nikon. The 64-bit version of Windows required a paid version of a third-party patch to view RAW images from Canon. With Microsoft’s updated Camera Codec Pack, such third-party or camera manufacturer patches are no longer necessary.

Should You Use RAW Now?

Does this mean you should start shooting in RAW just so you can use this new software from Microsoft? Probably not! RAW images take up much more space. Hard Drive space is cheap these days, but moving those images around takes more effort. Also backing the originals up to a cloud service will take forever because your photo library will be, at minimum, twice as big as those with only JPG files. Finally, working with RAW files is a little more complicated. Even using Windows Photo Gallery editor requires the user to convert the RAW file into a format it can use for editing. The patch only lets users view files. Editing still must be done in the compressed JPG format. 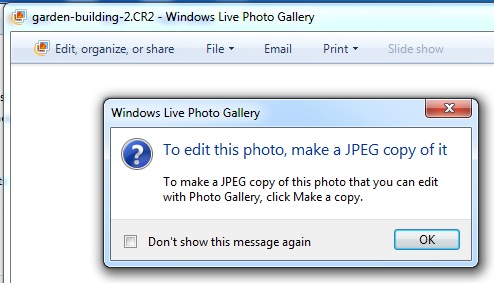 Here is Microsoft’s video about the new camera pack and its capabilities and limitations:

Advanced photo editing programs like Photoshop, or its younger brother Photoshop Express, will handle RAW files. But you have to go through the digital version of developing the photo by opening them in Adobe Camera RAW software, which then makes the file editable in Photoshop. As you can see in the video above, you still have to convert RAW images to edit them in Windows Photo Gallery too.

This is a wonderful development for advanced amateurs and professional photographers who use Windows computers for their workflow. I know I will enjoy being able to quickly take a look at my images in Explorer to see what they contain before opening them for editing in Photoshop. Most advanced or professional Photographers uses applications, like Lightroom, which have always shown thumbnails of RAW files. Sometimes you want a quick look without opening another application. Occasionally you want only to crop a photo without doing a lot of heavy editing. The ability to open a RAW image in Photo Gallery might help. Seeing the thumbnails in Explorer is a huge plus.

You can learn more about thew new codec pack and download it at the Windows Team Blog.