The Antec soundscience rockus 3D 2.1 Speaker System is a great companion to any desktop replacement notebook. If you have a desktop system, chances are the speakers are pretty mediocre. Only a few notebook computer manufacturers actually put great sound systems into their computers realizing that most of us will likely either hook up head phones or make do. That is why these speakers are a good option with nice sound. 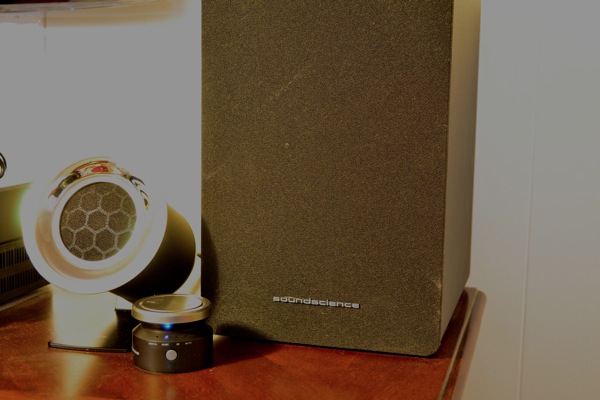 Antec sent us a set of these 2.1 speakers to test. We found that the sound is very good, especially when compared to the built-in speakers on most computers.

You could just hook the speakers up to a desktop system, use them with your entertainment setup, or do as we did – test them with a notebook computer. We used a 15″ 2011 MacBook Pro for a desktop replacement system. These speakers really improve over Apple’s built-in sound. 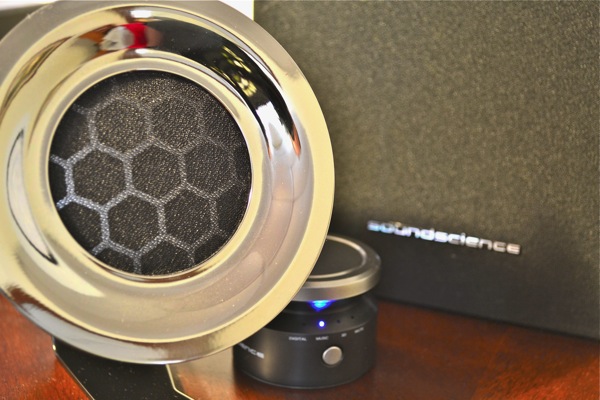 The unit is made up of a very large subwoofer that is 13.8″ x 10.6″ x 7.7″ and weighs 18.7 lbs. This is definitely not a mobile setup, although we did take them outside for our outdoor theatre setup. The two satellite speakers are kind of cool looking with a honeycomb pattern on the speaker inside round aluminum bowls that funnel the sound out into a wide array. They are 5.7″ x 6.3″ x 4.7″. The total output of the speaker system is 150 Watts with 25 Watts for each speaker and 100 Watts for the subwoofer. The maximum sound output is 95 dB.

In our outdoor movie night they filled a large area with a 10 foot high inflatable screen and about 25 people sitting about 20 feet back. 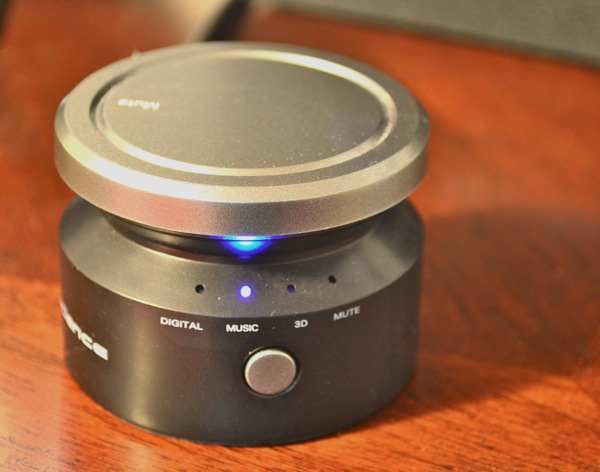 The sound control comes from round controller that has a silver dial on top. Push it down to mute the system and rotate for volume. The button on the front switches between the analog hookup which plugs into a 3.5mm jack for stereo sound and the digital system which comes via an optical cable. Both sound setups are very good, although the digital is much louder and has better quality.

There are a four different modes, two for analog and two for digital. Each has a mode for music and 3D. The optical cable provides the digital mode while the 3.5mm cable powers the analog mode. The music mode in analog is the one we set it at most of the time. It offers deep bass and nice sound. The digital setting sends the music through an optical digital cable which we tested with the Apple TV. The sound was great! Everything was crisp and movies had a very rich sound with everything coming through clearly. The 3D sound in either mode doesn’t sound any more 3D than the music mode, so it is not even worth a third setting. It would be simpler to just have the button toggle between digital and analog and you wouldn’t lose anything valuable. 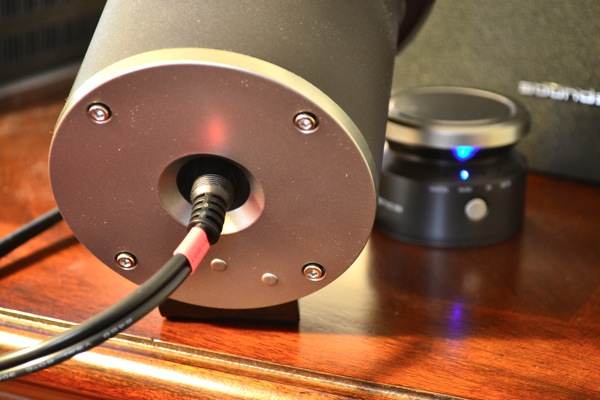 Setup is easy. Hook up either the 3.5mm jack or optical audio cable to the subwoofer and your external source. Plug the speakers in with the wire that goes into the back of the speaker and runs to the subwoofer with positive and negative posts. Plug in the control dial and the power cord into the back of the subwoofer and you are ready to go. It takes a little getting used to the functions of the control dial, but the little help booklet explains it all. Push the button to switch between 3D and music. Hold it in to get Digital.

The other problems include the angle the speakers point and the lack of an auxiliary input. The angle of the speakers would be better if they were adjustable. The lack of an auxiliary input jack make these speakers a one trick pony. A lot of speaker systems have a jack to plug in an another device, like an MP3 player. With these you would have to unplug the 3.5mm speakers from the laptop. The work around is to plug in the optical cable to one source and the stereo jack to the second source. If both devices are stereo only, then this won’t work.

We really like this system despite the limitations. They are not as good as an expensive Bose system, but compared to our Klipsch Pro Media 2.1 system they sound great at a comparable price. If you get them directly from Antec’s online store you will pay $200. Look around and you can find them as low as $156 on Amazon and elsewhere.