Windows 8 leaks have popped up with lots of interesting features including the ability to run the operating system from a USB flash drive, according to Win Rumors. This has been possible with user created hacks, but this feature will be built-in and called Portable Workstations. 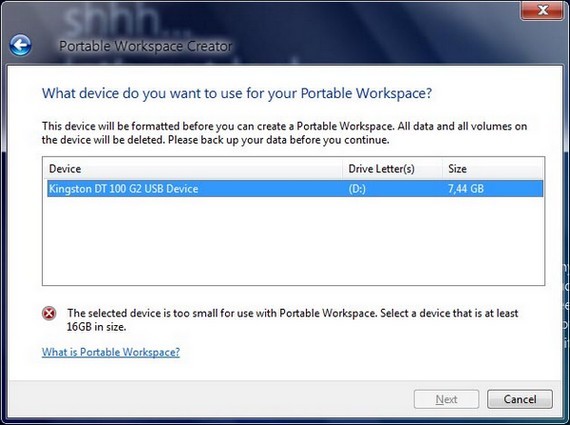 This is likely for enterprise users who want to boot Windows as they are trying to fix a broken install on one of their supported PCs. The person could figure out what is wrong and use the version of Windows to boot and fix the problems. It is likely that this will only be available in Microsoft’s versions of Windows for the enterprise like Ultimate or Professional version of Windows 7. Rest assured that users will create these flash drives for live versions of Windows 8 used by enthusiasts.

The feature will require a 16GB USB flash drive. The screen above shows an 8GB drive being rejected. The tool will format the drive and install Windows. Due to the huge array of devices attached to PCs, it is likely this will only be a “safe mode” style of Windows which can boot basic functionality unless it is on the PC that it was created with. Maybe the computer from which it is created will have all the drivers for that specific machine included. As a result one could use it to fully run the OS on that PC. In other words, don’t expect to be able to run it on any computer without some tweaking or hacking.

This is just one of the cool new features we have seen with Windows 8 leaks. Paul Thurrott’s WinSuperSite has a comprehensive list of information about all the leaks. He is also a Microsoft expert who is likely currently using early builds of Windows 8, so he is one of the best sources for truth or fiction about Windows 8 going forward.

The most noted new feature leaked is the Windows Marketplace, a Microsoft app store just like the new Mac App Store on Apple computers. However, Paul says that the “leaked screen shots” are “early prototypes or could even be fake. (For example, the name Windows App Store is suspicious.)” He does say that Microsoft is adding an app store and that it will likely look like the Apple store since “it’s a good model to follow.”