Apple is hard at work on delivering a better iPhone and iPad dock, or that’s what a recent patent for a hybrid DisplayPort, USB 3.0, Thunderbolt connector.

The new dock uses the same 30 pin design found on the standard iPhone and iPad cables, but with the inclusion of all these connectivity options, a single cable could pull data transfer duty on a wide array of devices. 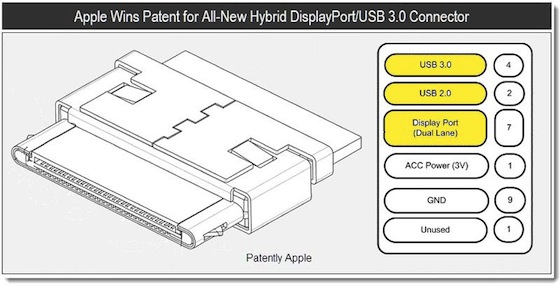 The upgraded dock could be just a patent issued to protect an idea, but it is quite likely that Apple will actually bring this one to market. Patently Apple, a blog dedicated to Apple patents, feels that a hybrid dock connector could come into use this year, or sometime in 2012.

The ability to use one cable, to connect to speedy Thunderbolt connections on Macs and high end notebooks, as well as USB 3.0 which will eventually be standard on entry level Windows notebooks.

Right now, this doesn’t mean much to you the end consumer, other than to let you know that yes, Apple is committed to the dock connector, even if what’s at the other end of the cable changes.