Hot on the heels of Microsoft’s own Big Think event for search in San Francisco, California, rival Google has released the results of its own sting operations which may cast a shadow on Microsoft’s efforts in the search space. According to search giant Google, Microsoft’s Bing search has been copying Google’s search results, which Google is claiming as cheating.

Details of the operations are explained in-depth at Search Engine Land, but essentially Google has been monitoring Bing search results and found that their Redmond, Washington-based rival was returning an unusually high number of similar sites as Google for incorrectly spelled search terms.

In the example that was presented at Search Engine Land, a user types in ‘torsoraphy,’ which is a mis-spelled word. Google’s search results shows that ‘tarsorrhaphy’ was the intended word and displays results for the correctly spelled word, displaying a Wikipedia entry for the correct spelling as the top search result. 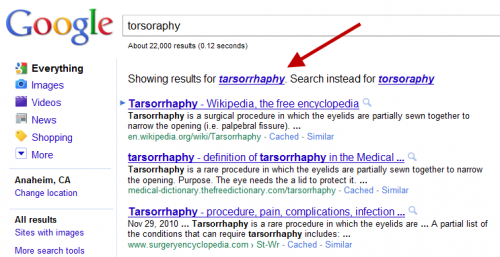 On the other hand, Bing just displays results for the correctly spelled word without showing the spelling correction, and the same Wikipedia entry, sending red flags to Google’s search engineers.

Across a wide range of searches, Bing was showing a much greater overlap with Google’s top 10 results than in preceding months. In addition, there was an increase in the percentage of times both Google and Bing listed exactly the same page in the number one spot.

By no means did Bing have exactly the same search results as Google. There were plenty of queries where the listings had major differences. However, the increases were indicative that Bing had made some change to its search algorithm which was causing its results to be more Google-like.

Google thought Microsoft’s Internet Explorer browser was part of the equation. Somehow, IE users might have been sending back data of what they were doing on Google to Bing. In particular, Google told me it suspected either the Suggested Sites feature in IE or the Bing toolbar might be doing this.

To see if its claims were valid, Google had set up a Sting operation, which essentially involved setting up a one-time code, which would be removed. The code would force search results that had little or no relevance to certain key words–mainly irrelevant gibberish–when searched. If those same results were to appear in Bing later, Microsoft would have its hand caught in the cookie jar:

To verify its suspicions, Google set up a sting operation. For the first time in its history, Google crafted one-time code that would allow it to manually rank a page for a certain term (code that will soon be removed, as described further below). It then created about 100 of what it calls “synthetic” searches, queries that few people, if anyone, would ever enter into Google.

These searches returned no matches on Google or Bing — or a tiny number of poor quality matches, in a few cases — before the experiment went live. With the code enabled, Google placed a honeypot page to show up at the top of each synthetic search.

The only reason these pages appeared on Google was because Google forced them to be there. There was nothing that made them naturally relevant for these searches. If they started to appeared at Bing after Google, that would mean that Bing took Google’s bait and copied its results.

The results began appearing on Bing in late December, suggesting that Microsoft had been mimicking Google in the search space.

Though Bing may be using user activity at Google to help improve its search results and algorithms, there are enough differences between the results of the two search engines that suggests that Microsoft may be incorporating other factors into results:

Google’s test suggests that when Bing has many of the traditional signals, as is likely for popular search topics, it relies mostly on those. But in cases where Bing has fewer trustworthy signals, such as “long tail” searches that bring up fewer matches, then Bing might lean more on how Google ranks pages for those searches.

For now, though, Microsoft reps are flatly denying copying Google. Google’s sting operation in the search space is an interesting read and you should head to Search Engine Land to learn more.