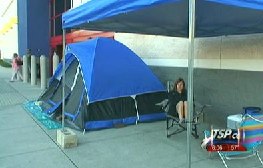 According to Best Buy, the Davenports are the first to line up in the nation for Best Buy’s Black Friday deals. A total of 10 family members are taking shifts so the others can work, go to school or lead other normal parts of their lives.

Best Buy is awarding the family a certificate deeming them the “First Family of Black Friday” today. We hope it’s more than just a plaque and a gift card or gadgetry is thrown in. Best Buy’s getting quite a bit of publicity out of this, surely more than the value of all the gadgets the Davenports could possibly buy.

Giving up Thanksgiving and waiting overnight in a Best Buy parking lot borders on the insane. Sleeping in a parking lot for nine days in the hopes of getting a deal is insane.

We’re all for scoring good deals, but time isn’t free.