Readdle’s Calendars and PrinterPro: iPad Apps of the Week

Readdle makes some useful software for the iPad. Their ReaddleDocs app is a nice document reader for the iPad and iPhone version of FlashDrive does a nice job of turning an iOS device into a Wi-Fi flash drive. There is an iPad version too, but I the size of the iPhone makes it more usefull as a flash drive. But these are not the apps I want to highlight.

This week, the iPad App of the Week is actually two apps Readdle’s brand new PrinterPro app and an older app which is a replacement for the iPad Calendar app called Calendars. Readdle gave us these apps to test and like their other apps I’ve used, I like them a lot.

Calendars is a simple calendar app that syncs nicely with Google calendar. It takes far less configuration and is simpler to use and set up. It does costs $6.99 in the app store, but it is worth the extra expense if you are a Google Calendar user and if you are annoyed by a couple of weaknesses in the built-in calendar app. 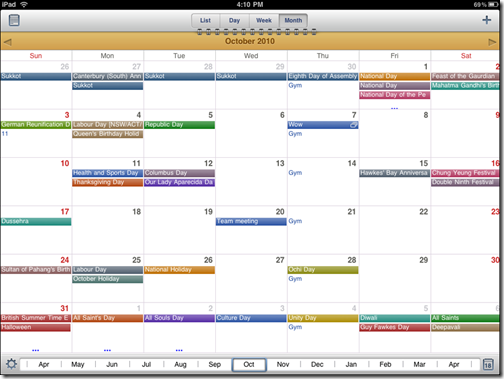 Some of the best features include the ability to drag and drop events. I failed to even show this in my video review. Once I learned about it, this one feature made me love the app even more. That alone makes it worth a couple of bucks. It handles multiple calendars better than Apple’s app.

Add in the simplicity of adding events by tapping on a day in the month view, and you have a great replacement for Apple’s app. It is also much easier to move between screens in Calendars. Instead of having to find a button on the screen, just swipe left to go ahead a day/week/month or right to go back. Why didn’t Apple include this feature? This alone makes Calendars more useful.

It has all the features of the built-in calendar plus these extras. And I like how it shows the number appointments on the icon, if you want it to. I wish it would show the date, like the Apple app. But that is the only way that I think Apple’s app is better.

Calendars is available for $6.99 in the App store and is the simplest Google Calendars syncing solution for the iPad.

Printing from the iPad is something that Apple should have included back in March when the iPad was first released — Printing. They will be adding it soon with iOS 4.2. Others have tried to make this feature work, but have failed or not implemented it well.

The best iPad printing solution right now is a new one from Readdle called PrinterPro.

The strength of Printer Pro is simplicity. There are a number of tabs along the right side. Those at the top are for direct printing and the ones at the bottom section are actually explanations of how to work around the limitations of iOS to make certain apps that do not have built-in printing able to print. 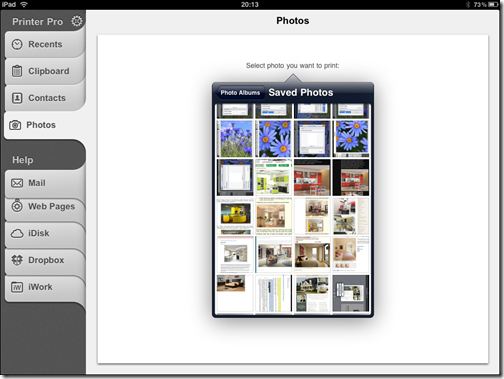 The Recents tab shows things that have been printed using the app recently. You can reprint them by tapping that item and choosing print.

To print to a printer attached directly to a PC, a client downloaded from the Readdle web site must be running on a computer with a printer installed. The list of computers and printers is shown when the Print button is tapped. Select the computer and the item to be printed will be sent to the computer’s default printer. Select the printer name in the bottom part (which are your networked printers) and the item will be sent to that printer and it does not require the client software.

In my tests selecting the actual printer didn’t work the first time. I am sure there is a way to make it work. It was likely an issue on my end. But choosing the computer was good enough for me. I suspect most users will not have a problem.

The other tabs in the top include Clipboard, Contacts, and Photos. The Clipboard will take whatever was last copied to the iPad clipboard and print it. If it is a web address it will print the whole page. I demonstrate this in the video below.

The Contacts item will print a specific contact and the Photos item is used to print a photo from the iPad’s photo library. This is likely going to be the most used feature, especially for pictures imported using the camera connection kit or if the iPad finally catches up to the many Android tablets being released which have built-in cameras. 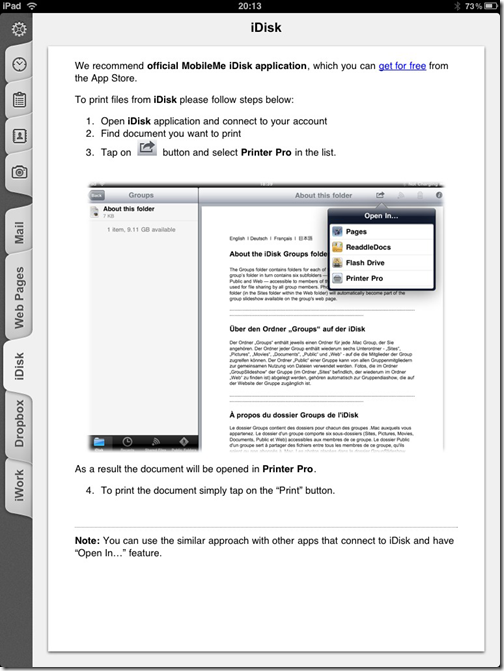 The only limitation of the app is that it cannot be used to print directly from Mail, Safari, or Pages. But this is not a fault of Readdle’s app but the iPad itself.

While there are convoluted work arounds for other printing apps, PrinterPro does a nice job of putting a help section right on the front screen. Each help tab shows how to make this work. With Mail, iDisk, and DropBox it involves opeing a document and choosing the Share icon and choosing Open In PrinterPro. Actually any app the has the share button will work. With Web Pages from Safari it involves putting a “p” in front of the address and press “Go”.

PrinterPro is also $6.99. It is the best iPad printing solution available to date.