PlayOn TV Approved by Apple but Still Not Working – UPDATED

PlayOn is a service that lets users grab Internet video from sources like network TV stations and Netflix and send it via a Windows-based PC (there is no MAC version) application to devices like the PlayStation, Wii, XBOX 360 and now iOS devices through an app that was finally approved by Apple.

When Apple relaxed their app guidelines, suddenly many apps being held up by the approval process have flooded the app store including the client for PlayOn.TV. Unfortunately, it caught the PlayOn folks off guard. They were not expecting the approval and have since updated their PC software resulting in incompatibility with the old version of the iOS app submitted months ago. 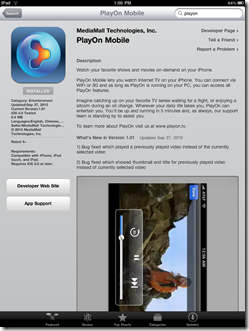 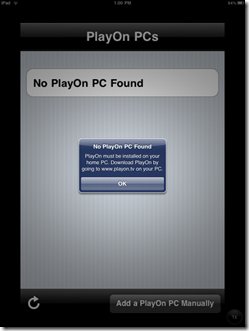 The process of getting things to work, once the new compatible version is approved, is a little complicated. A user must install the PC client that starts a media server on the PC and includes some channels, like Hulu, by default. Other channels are added via either scripts or plugins. There are some plugins and scripts which can be installed automatically and others that must be copied into the right directory on the PC. My own experience was that on Windows 7 64-bit, the auto installers failed to work.

Available channels include Netflix, ABC Family, Food Network, NBC, Revision3, SyFy, Comedy Central and Netflix, to name just a few. The iOS client starts and searches on the local network or over the Internet for the server running on the PC. When it finds it, the videos from the installed channels are able to be streamed on the device. There is no iPad native version yet. And the version in the app store is not functional yet [See update at bottom], by admission from Chris from PlayOn Support in the company’s support forum. Though, apparently some have been able to get it to work, despite what the support personnel posted.

Once PlayOn is updated this could be a great way to put an end to paying the cable or satellite provider for TV content.

UPDATE: Since we published this piece PlayOn has released a new version of the iPhone app, version number 3.0.20.1221, which should fix the remote connection issues. If you experienced problems we suggest you update to the most recent version of the PlayOn.TV iPhone app and try again.