iHome has just come out with the iHome iB969 Charging Station to help you Charge Your World!â€ The charging station is a compact device that will charge up to four devices. Two of those will have to be iPhones or iPods as the station has the dock connector slots that fit only those Apple devices. There are also two ports for USB cables to charge anything else that can be charged via USB. 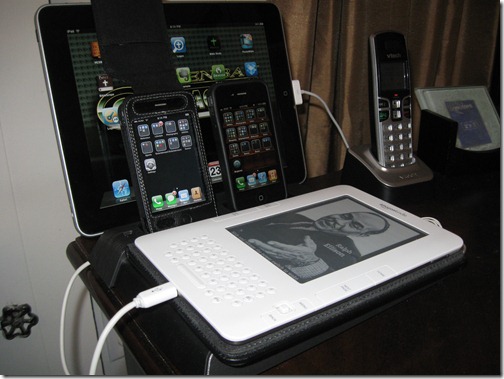 I placed the charging station on my night stand and each night for the last week charged my iPhone and iPad as well as my wife’s iPhone and our family’s Amazon Kindle. Each morning this dependable solution rewarded us with full batteries ready to take on the day. It is unusual to find one solution that can charge so many devices, but iHome really delivers. 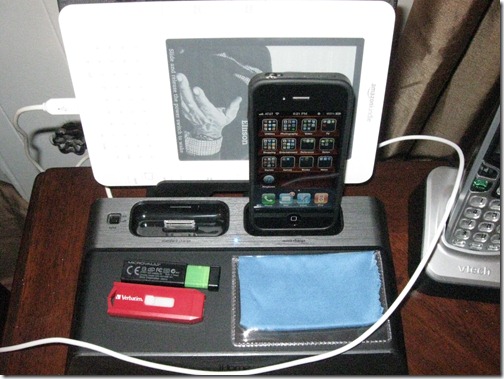 The station is made of plastic and has a sturdy enough base that it will hold an iPad in the back slot designed for it. If you carry your iPad in a case you will have to take it out to keep in this back channel, unless the case is very form-fitting like the clear Belkin iPad Grip Vue case that I used to use. My Incase Book Jacket Case is just too bulky and adds too much weight for the iPad to fit securely in this holding spot without the iPad falling over or the charging station tipping over due to the weight of the case with the iPad. My solution is to just put the iPad on the night stand next to the charging station and use the back channel for my Kindle. It is not designed for the Kindle but the eBook reader still fits in the slot even with its Amazon case on it. 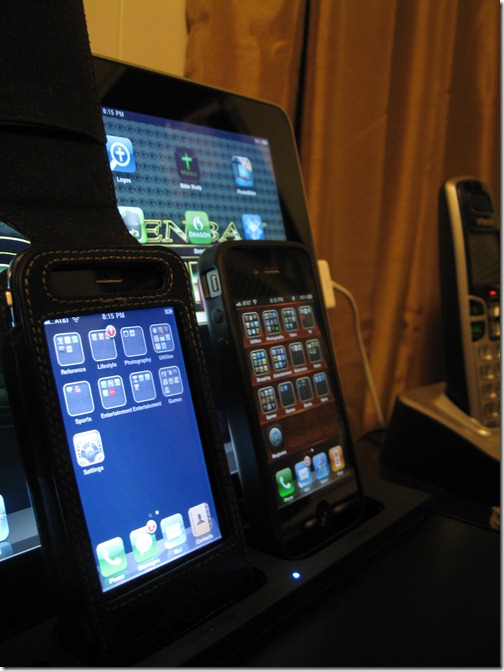 iHome really pays attention to details in designing their solutions. The base of the charging station will expand if your device is too wide to fit in contracted position (see video for a demo). In all the documentation iHome has pictures of a Sony eBook reader. So if you have one of those, it seems it was designed to fit that device when expanded. But it also fit our Kindle even though it did slightly hang over the front edge. 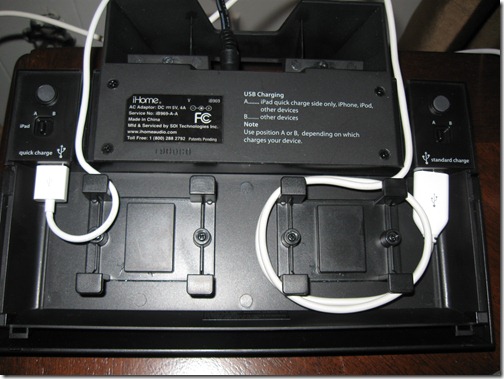 The bottom of the station has channels for the USB cables plugged into the two ports on the bottom. Without them the cables would make the base of the station unstable. Be sure to run the cables in through the channels. Also underneath is a place to wrap up a particularly long cable. There is a switch next to each of the USB ports. One is designed specifically for the iPad and in position A it charges the power-hungry device. In position B it will charge a device that requires less power and thus saving a few watts and pennies on your electricity bill. Every little bit helps protect our planet right?

For the other USB port there is also a switch. The instructions tell you to try to charge your device in position A. If it doesn’t work switch it to B. My Kindle, which can be a little picky about what will charge it, charged just fine in either position. Also the power brick that plugs into the AC outlet has collapsible prongs making it easy to take the charger on the road. I know I will pack it in my computer bag when my family and I take long trips and have to stay overnight in a hotel since it will allow one outlet to charge all four of our iPhones. 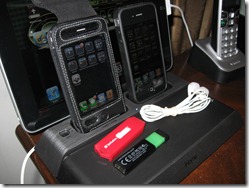 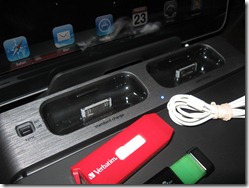 The two universal Apple docks on the top will charge anything other than the iPad. The left one is for basic charging and the right one is for fast charging.

One of the really nice things about the dock is that if you plug in the supplied cable into your computer, it will sync the device in the left universal dock. It doesn’t sync the right dock or the either of the USB ports on the bottom. But if you put the station next to a computer or just leave the cable in the back and plug it into a notebook next to your bed, as I do, you can charge and sync using the station. 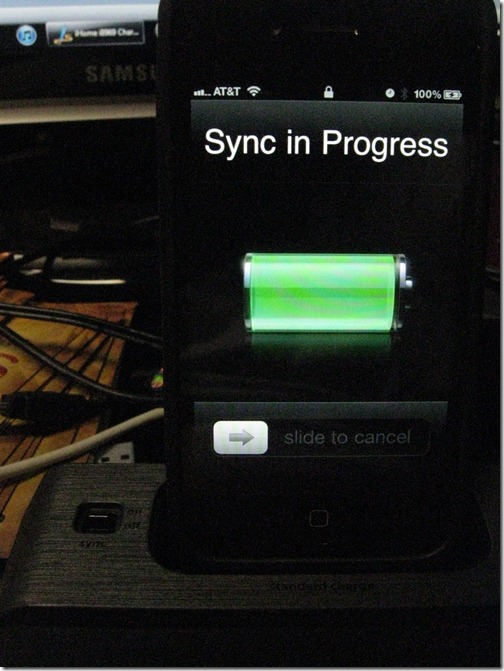 I have very little bad to say about this. It could be a little heavier and I wish that the slot in the back would let me leave my iPad in its case. But charging the Kindle there is fine.

The device costs $59.99 which is a good value for a charging station that does so much. The Griffin Power Dock I showed you in the video is $50 retail and can be found for just under $30 now. But it won’t sync with a computer and only charges two iPods or iPhones and won’t charge other devices like a BlackBerry or Kindle.

I recommend the iHome iB969 to anyone who needs at least three charging stations and has both an iPhone/iPod and an iPad or another mobile device that charges via USB.