Google is in the process of rolling out the ability to make calls to land lines and cell phones from within Gmail, according to our sister site GottaBeMobile.com. But the real question is — is the service good enough to make me leave my paid VoIP service?

When I read about the new feature at GBM I quickly checked my two Gmail accounts and found that find the service is enabled in one of the accounts. To find out if it is enabled in your account log in and look on the left side of your Gmail page; if it is enabled, you will see a link that says Call phone.â€ If you don’t see it, don’t worry it is being gradually rolled out to all accounts. 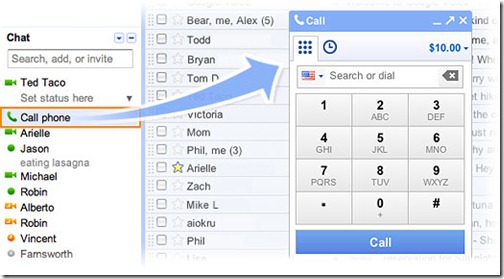 When the user clicks on it a popup offers to install the Google Chat software (see below), if it is not already. It may ask you to update if you do already have it installed. 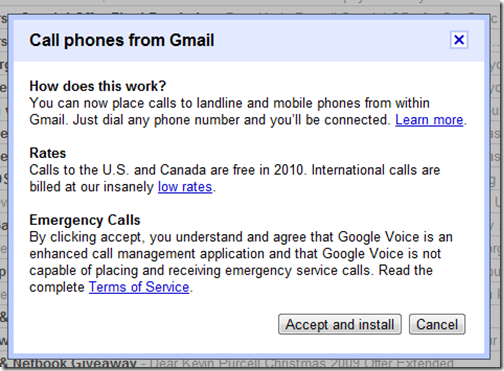 After installing it, I was asked to restart Chrome and then the link opens a small box with a dial pad. Type in the number and hit call, just like you would on a cell phone and it dials the number. I tried it out calling my own cell 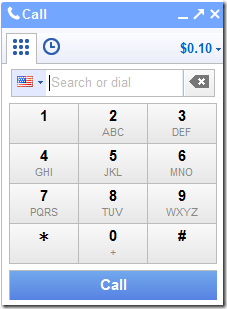 phone and the sound quality was great. I was using the mic on my MS LifeCam Cinema webcam and the quality and sound was no different from regular phones. With a dedicated headset and mic it would even be better. If I hadn’t been the one making the Google Call I would not have known that the call came through my computer.

I can see that this will really have an impact on VoIP services that charge for computer to phone services like Skype. Google promises that calls from computers to land lines or cell phones in the US will be free for at least the next year. I am sure they are giving it away to get users used to it and then may begin charging for it. By then, Google probably hopes you will be so reliant on it that you will be willing to pay.

Some smart OEMs could begin selling regular phone handsets that interface with your computer via a USB or Bluetooth and allow you to use the service with these phones. I could also see Google making this compatible with cell phones that are not running Android as a way to get customers to bypass their own carrier using Wi-Fi. Could an Android phone with no cellular provider show up for those who are nearly always within range of a Wi-Fi hot-spot? With this service, which rings in GMail when your Google Voice number is called, it could be possible allowing users to thumb their nose at AT&T, Verizon, Sprint or T-Mobile paying just pennies per call and texting for free using Gmail.