The Camera Culture team at MIT’s Media Lab have created an “interactive display for estimating refractive errors and focal range.” Consisting of a $2 box that refracts the image from an app on an Android smartphone, this new technology assesses your vision and reports a prescription recommendation. 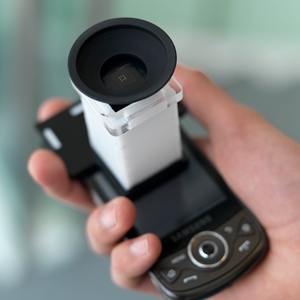 This new technology, labeled NETRA, could be very useful for optometrists, especially those who travel to developing countries to assess people’s vision. It would eliminate the need for much of the complicated, non-portable hardware that is usually needed to measure someone’s vision. Plus, it is considerably  less expensive.

The concept used to assess the user’s vision is quite simple. The app on the Android smartphone displays a set of dots and lines. The user than manipulates the image until things appear to be aligned. Once this is completed, the app recommends a prescription.

On a consumer level, this could allow someone to get their prescription information, and go purchase their glasses or contacts, removing the need to take the time to schedule and go to an eye doctor appointment.

A video demonstration of the NETRA cell phone-based optometry solution can be viewed below.

The production of the NETRA hardware and software is already under way.