For the past month I’ve had the chance to try out the Acer Aspire 5542, a notebook computer featuring AMD’s Vision technology. The Aspire 5542 is not a new notebook, but to get a feel for what a Vision Notebook PC offers, we were offered a few samples to test for ourselves. Josh Smith shared the background on AMD VISION last month. The three VISION branding monikers are designed to help a notebook computer buyer better understand what he or she is getting.

VISION Premium for demanding users who want to play games, do some video and picture editing, watch HD movies and the standard emailing, office tasks and surfing. VISION Ultimate is for the high end notebook user who does intense games, record live TV and watch HD movies or listen to music in 5.1 surround sound. The third category, VISION, is where the notebook I am reviewing sits.

For the budget minded computer user, an AMD VISION machine like the Acer Aspire 5524, is designed for basic computing needs like web surfing, email, light gaming and watching movies or other video. 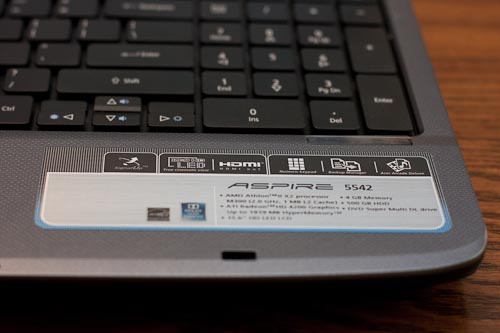 The 5542 is not a speed demon nor is it a turtle. The Athlon II Dual-Core M300 processor and 4 GB of DDR2 memory make it more than

capable for handling most of the tasks I threw at it. I am not a heavy gamer, but was able to play some online flash games as well as sampling the free weekend of Call of Duty: World at War that Steam recently offered. There was no lag and while ATI Mobility Radeon HD 4200 card did fine in my short test, I would not want to do heavy gaming on this system. That’s okay because it’s not designed for that. The screen is bright and clear and has a decent viewing angle. When I was watching a movie, my wife was sitting next to me and she couldn’t see it that well, but I was able to move about 30 degrees in either direction and still get a decent picture. The display is a reflective so it made seeing what I was during under sunlight a challenge. Strangely enough direct sunlight pointed right at the screen was not that bad. The usability diminished when the sun was coming in at an angle.

The Synaptics Multi-Gesture touchpad is responsive. I do not like trackpads, but this one functioned fine. Manufacturers are starting to go with one long button instead of a separate right/left button on their trackpads. I don’t like this at all, and the Acer has one. On the positive side, the buttons for volume control, toggling Wi-Fi or Bluetooth and accessing the quick launch software are handy and positioned just above the keyboard. 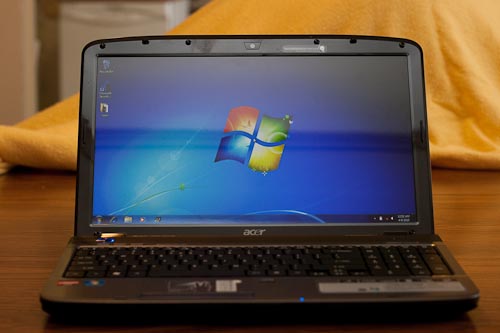 I tested the 5542’s video capabilities by watching an episode of Roswell on Netflix. It handled the task alright. There was a stutter or two early in the video and sound was a little tinny. The volume from the Virtual Surround Soundâ€ speakers was too soft. But the picture quality was good and since most online video stutters on occasion, I think it could have just been network lag as much as the PC’s fault. Sadly no computer can give you back the hour you lose from watching a show like Roswell.

I tested the battery life by playing a DVD. It lasted just under 2 hours at about 1:55 while watching the DVD The Hurt Locker. And there were a couple of times that the picture froze for a brief second. If you want something to play DVDs a lot, look elsewhere. But for the occasional one while on the road will do just fine.

One other little thing that really was annoying was the latch to open the notebook. You had to exert a little effort to open it an I found it nearly impossible to do one handed, which I am used to doing with my own system.

Currently you can get an ACER Aspire 5542 for as little as $529 from Amazon and other outlets.

If all you want is a basic notebook computer and you won’t need to be unplugged that long, this might be a decent choice. The keyboard really hampers it, however; for those plugged in and needing a simple computer to surf the web and do a little bit of writing it will work. For people who write a lot or are on the go; look for another option with longer battery life or a more responsive keyboard.

Here are the detailed specs for the Acer Aspire 5542 Notebook PC: