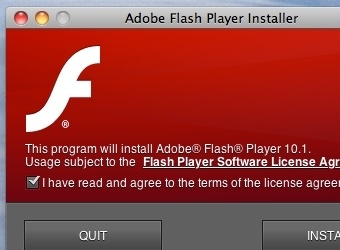 Christmas has come early for Mac users.  Adobe wants you to see what Adobe Flash Player 10.1 looks like on your Mac. According to Mac Rumors, Adobe has released a preview release of the 10.1 Flash Player for Mac OS X that supports H.264 video hardware decoding on Mac OS X 10.6.3.

To use the new version of Flash Player, a.k.a Gala requires one of the following graphics card hardware: NVIDIA GeForce 9400M, GeForce 320M, the or GeForce GT 330M. The types of Mac hardware supported right now:

There are limitations right now for this beta:

How do you know if your new version of Adobe Flash Player is working? If it is working properly, a small white square will appear in the upper left corner of the video.

To try the new version, you can download it from Adobe Labs.