Patient Care with an iPad Thereâ€™s an App for That

The next time you go see your dentist, he or she may be using an iPad. No, it won’t be for a teeth cleaning, but might be using it to keep records more efficiently with MacPractice, a system of medical practice management and clinical software. It allows doctors to use their Macs, the iPhone, and now the iPad in patient care. Dentists, medical doctors and eye doctors, along with support staff, can use an iPad to do a number of things that are normally accomplished via forms, paperwork, or x-rays. This can save money, time, and alleviate data entry errors. 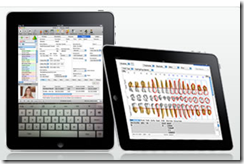 MacPractice Software on the iPad

We’ve been overwhelmed with requests from doctors who want to use MacPractice on an iPad,â€ said Mark Hollis, president of MacPractice. The interface solutions we have tested allow doctors to use this incredible device in a patient encounter, enter the visit data into MacPractice EMR and have access to medical and dental images, prescription history, etc. literally at their fingertips at the point of care.â€

Here are some of benefits of the MacPractice system, according to their press release and web site:

MacPractice is used at around 3,000 different doctor’s offices, according to Mark Hollis of MacPractice. You can learn more about the use of the iPad with MacPractice at their web site.

In this video, the setup and use of MacPractice is demonstrated.

The Notebooks.com team saw a glimpse of using this type of idea for medical practices at CES this year, but now its a reality. This is the beginning of the next wave of medical technology. And, its brought to you by Apple.