Need Some Content for That Blu-ray Drive? Check Out This Deal on Planet Earth — $39

Blu-ray is the HD disc format that is finally starting to replace the DVD. This is thanks to the sale of new HDTVs, the inclusion of Blu-ray in the Sony PS3, and many computers now being equipped with Blu-ray drives. Most of the larger high end laptops are coming equipped with Blu-ray drives, and for good reason. Some of them boast full 1080P (1920×1080) resolution screens! Even netbooks are getting in on the HD game. The HP Mini 311 can even handle Blu-ray playback through an external player and output in full HD to an HDTV through its HDMI port.

What I’m trying to get at is that HD and Blu-ray have landed on the personal computer. But what content should you invest in? If you’ve recently been looking for some exciting Blu-ray content, you should definitely play close attention to this deal on some of the best HD content you can get your hands on.

I’m talking of course about the majestic, breathtaking, (insert more phenomenal adjectives here) , Planet Earth, a documentary that shows some of the last places and animals on Earth unaffected by humans. If you’ve ever enjoyed Discovery Channel programmingâ€¦ changes are you’ll love planet earth. I’ve seen the whole series front to back and it is outstanding. I would call it the best HD content currently available. Ok enough gushing, maybe I’m just a nerdâ€¦.

A hundred years ago, there were one and a half billion people on Earth. Now, over six billion crowd our fragile planet. But even so, there are still places barely touched by humanity. This series will take you to the last wildernesses and show you the planet and its wildlife as you have never seen them before. 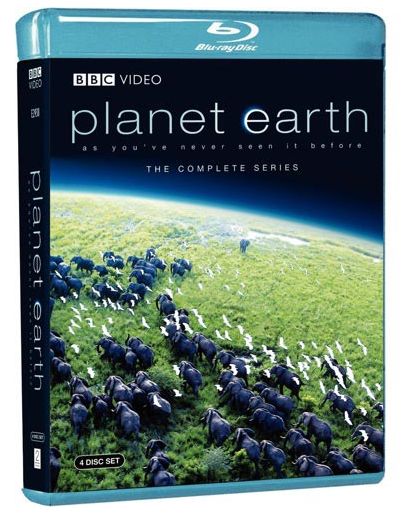 Anyway this is what you are here for. A great deal. Well my friends, you can pick up the complete Planet Earth series on Blu-ray disc for the wonderful price of $39 shipped! Walmart.com currently has this wonderful deal. With the holidays coming up, this is a gift for the whole family (but you might want to cover the really little one’s eye’s during the predator/prey chases. Survival of the fittest can be quite dramatic!)