Amazon.com is matching Walmart’s Xbox 360 promotion with a special Gold Box Lightening Deal! If you missed out on the Walmart deal and weren’t able to pick one up in store or online, you can try getting in on this one! The deal launches at 12PM PST and is likely to have VERY limited qualities.

If you buy a Xbox 360 Arcade for $199 from Amazon.com, you’ll get a free $100 gift card for future purchases at Amazon.com! As mentioned in the Walmart post, the Xbox 360 Arcade console comes with everything you need for gaming. You’ll be able to access the deal at 12 PM PST at this link. The promotion will go live in about an hour and 20 minutes, so be sure to place your order quickly when the deal is available! Amazon.com’s Gold Box Lightening Deals usually sell out fast, so don’t delay with your purchase! 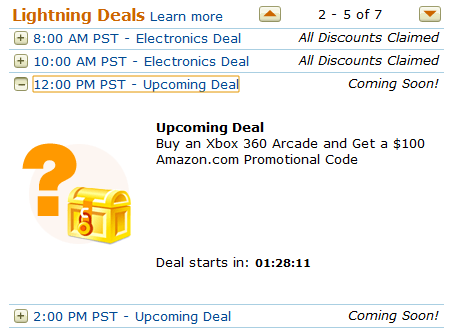