‘Restart Without Prompting for Password on Boot’ Option Would be Awesome

I’ve been wishing for this feature for quite some time. You know the routine: your notebook bugs you are needing to be restarted because updates have been installed, or perhaps you just want to restart it because it seems to be running slowly. You hit the restart button and walk away to use the bathroom or make a cup of coffee (knowing that, with many applications, your computer will take several minutes to fully boot up). You expect to leave the room an come back to a freshly restarted notebook (wouldn’t that be convenient?). But alas, when you do return, the computer is waiting for you to enter your password, and won’t really start booting up until you do so. This is such a frustrating process. One shouldn’t need to hold the computer’s hand while it boots up. It is a computer for crying out loud, it should be able to do this stuff automatically. Disabling one’s password isn’t a solution; people usually have passwords on their computers for a reason, whether it be security or privacy, and disabling the password is not an option. 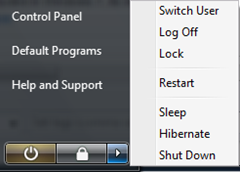 A simple â€˜reboot without prompting for password’ option when restarting would be an incredibly simple fix to this annoying issue, and would allow one to restart their notebook, walk away to do something else, then return to a fully booted computer rather than come back, only to be required to enter their password, then wait several more minutes while the computers all the way upâ€ — if you will.

But wouldn’t this sacrifice security? In the unlikely situation that someone steals your computer while it is turned on, couldn’t they use this option to never be prompted for a password? Nope. An easy fix to this potential breach in security is to prompt for the password when the â€˜restart without prompting for password on boot’ is selected. This way, the same security is retained by requiring the same credentials, only the order in which the boot/password prompt is rearranged to be more accommodating, when the user so chooses.

I wish that this feature would have been included in Windows 7, its inclusion alone would been a new feature that I’d actually use.