Dell’s unveled the Latitude E6400 XFR, a rugged notebook that’s designed to stand up to whatever first responders, and military personnel can throw at it. The E6400 XFR meets and exceeds 13 military specifications.

The Latitude E6400 XFR’s exterior is built from what Dell’s calling ‘Ballistic Armor’ so it can fend off drops and impacts. Its ports are sealed to keep out dust and water. As you can see in the video below the E6400 XFR can take on a LOT of water.

The Dell Latitude E6400 XFR has a starting price of $4,299, but that’s a small price to pay for what amounts to life-saving equipment. 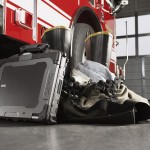 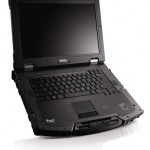 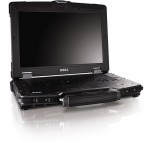 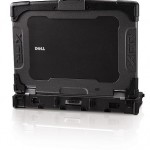 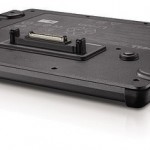 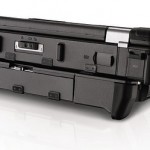 o 25 percent higher drop specification than any computer in its class up to four feet with system powered down and closed and up to 36-inch drop test with the unit operating and LCD open;2

* The Latitude E6400 XFR also features PrimoSeal Technology to enhance protection from dust and liquid with compression gaskets that deliver a higher level of ingress protection, or shielding from dust and moisture, than any system in its class with an IP-65 rating.3

* The fully rugged laptop is engineered and independently tested to more than 13 military standards (MIL STD 810F) for operation in challenging environments.

* Up to 167 percent faster than the Panasonic CF30 in graphics-intensive applications;5

* At 2.2 inches thick and starting at 8.5 pounds, the Latitude E6400 XFR is 15 percent thinner and up to 5 percent lighter than the previous generation XFR;7

* Large 14.1-inch wide display including DirectVue Technology – customers can work in direct sunlight on a screen that features impact resistance; and,