In recent years, consumer demand for timely driver updates has outgrown the rate at which drivers are currently supplied to the market, and the explosive growth in notebooks makes this increasingly more painful for consumers. Customers need new drivers in order to be able to take full advantage of the latest games and applications.  Game developers are especially frustrated by notebook drivers as evidenced by Mark Rein, VP of Epic Games, who wrote, “Unfortunately for laptops you have to get the drivers from your manufacturer. This is the secret curse of gaming on laptops.” Browse through any gaming forum and you’re sure to find countless gamers complaining of the very same limitation.

In response to out-cries like this, NVIDIA began offering a set of notebook drivers on NVIDIA.com years ago, but support was limited mainly to high-end gaming notebooks. Although this driver brought the support and performance features gamers were after, the OEM’s hotkeys no longer functioned. This is sometimes still acceptable for enthusiasts and hardcore gamers, but for mainstream users, this was still viewed as less than acceptable.

Last month, NVIDIA radically changed the way notebook users got support by announcing a new quarterly driver release program for NVIDIA GeForce GPUs on NVIDIA.com.  By leveraging an intelligent installer and modular driver design, NVIDIA’s quarterly driver release is able to provide a dramatic increase in performance and functionality without sacrificing any of the vendor-specific customizations for your particular notebook. Here, your system will maintain all original operations including hot-keys, power management functions, and system suspend/resume behaviors.

While it is true that NVIDIA did this in part to address our gaming customers, another reason was because of the fact that there are other segments that are seeing benefits of the GPU.  GPUs, once used only for games, are now being tapped to accelerated photo editing, mapping applications, game physics, distributed computing, a variety of video applications and other consumer applications. These new uses for graphics processors has been termed ‘Graphics Plus‘. As ‘Graphics Plus’ grew stronger and more successful on the desktop side, NVIDIA realized that tens of millions of notebook users also had a lot of untapped power and unused capabilities in their machines. All they needed to unlock that power was a software driver, as the GPUs already supported the technology. Graphics Plus is an important part of how NVIDIA differentiates its GPUs from the competition, so NVIDIA needed to turn ‘Graphics Plus’ on for notebook users.

The first driver from this new quarterly release schedule enabled support for the powerful NVIDIA CUDA technology on GeForce 8M and GeForce 9M GPUs. As the foundation of ‘Graphics Plus’, CUDA technology unlocks the power of the GPU’s processing cores to accelerate the most demanding system tasks and applications.

One of the most exciting features CUDA brings to notebooks with this new driver is support for PhysX technology for GPU physics effects in games. As one of the most highly-anticipated titles of 2009, Mirror’s Edge is the first game to fully take advantage of GPU physics effects throughout the entire game. Simulated glass and cloth offer large scale improvements in fidelity, while thoughtful details such as simulated weapon debris and particle effects improve realism in every encounter with the enemy. 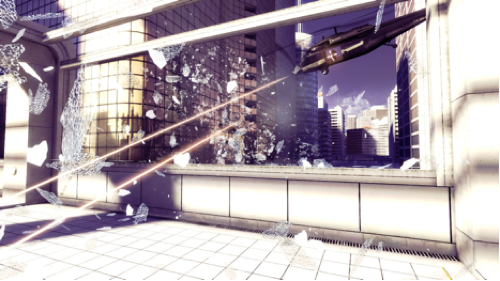 As you can see in the screenshot above, Mirror’s Edge is not your typical PC game. PhysX brings features like physically simulated glass, cloth, smoke, wind, and particle debris to the PC version of the game. In short, the environment is significantly more lifelike as glass shatters realistically and remains in the game world. Wind from the helicopter blades can stir-up debris or glass shards, disturb smoke coming from chimneys and vents, and even cause banners and cloth to sway. Tearing collision allows weapons to shoot through transparent blinds and tear construction tarps, and weapon particles simulate weapon sparks which bounce off objects before fading. This game is a great example of the increased levels of realism and immersion made possible by NVIDIA PhysX for desktops and notebooks featuring GeForce GPUs.

NVIDIA CUDA technology offers much more than PhysX. CUDA is the world’s only C language environment that enables programmers and developers to write software to solve complex computational problems in a fraction of the time by tapping into the many-core parallel processing power of GPUs. Currently, consumers can take advantage of several CUDA-based applications for transcoding including Badaboom and TMPGEnc. CUDA-based GPU acceleration is also now available for a variety of video editing applications, including Cyberlink Power Director, MotionDSP vReveal, and ArcSoft TotalMedia Theater.  Of course, there are also a broad set of pure computational applications that are taking advantage of brute GPU computation power using CUDA, including [email protected], [email protected], GPUGRID and applications like MatLab.

NVIDIA’s new quarterly driver release program is a big win for notebook consumers using NVIDIA GPUs.  These drivers allow them to maintain top performance, quickly fix bugs, and unlock the same features and functionality that their desktop counterparts have. It also means NVIDIA can extend support for Graphics Plus technologies to notebooks as well as desktops. For NVIDIA, this represents a strategic move that allows NVIDIA to enable features on notebooks that are becoming more valuable to consumers. It also allows NVIDIA to offer an unprecedented level of customer service that no other GPU maker can claim.

Should your notebook feature a supported NVIDIA GPU, head over to www.nvidia.com to download the latest drivers for your system. In doing so, you can ensure you are witnessing the highest possible performance while enjoying increased productivity and functionality. As each quarter passes, NVIDIA will post a new driver to their website to ensure notebook users are getting every level of performance and compatibility they expect and deserve from their GeForce GPUs.